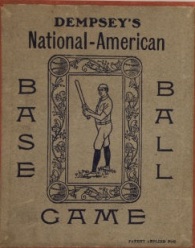 One of the rarer 20th Century baseball games that included cards is certainly the 1909 Dempsey’s National-American Base Ball Game. The overall game included a deck of playing cards, instructions, and a promotional insert.

The playing cards are what would be of interest to most collectors. One side has action words printed on it to dictate game play. The other side has a true baseball image, a generic picture of a player in orange ink. The player is standing with his feet apart and is the same picture shown on the box, which is pictured here.

No formal checklist for the set exists since the cards merely contain action words on them.