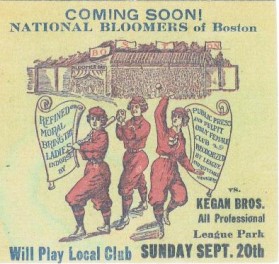 This is a trade card promoting a women’s baseball team.

The card serves as an advertisement for the National Bloomers of Boston Team – a women’s baseball squad. The team toured in various areas playing against local teams.

Pictured here are three women baseball players – one batting, one readying to pitch, and another making a catch. A banner is shown as well that states the games are, ‘Refined and Moral’ and that it is safe to ‘bring the ladies.’

This particular card shown here says the team would play a game against Kegan Brothers on Sunday, September 20th. It is unknown if this same card was used to promote games against other teams but that appears likely.