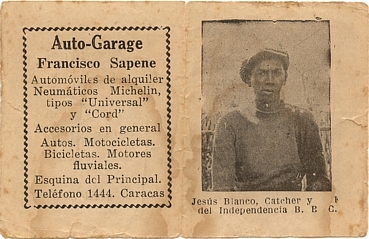 The 1916 Industrial Cigarrera cards are a unique, rare set of Venezuelan cards.

The cards are mini booklets of sorts and consist of two parts on each side. The inside has an advertisement and also has a picture of a player. Below the picture of the player is his name, position, and team.

The outside/cover states roughly that the cards are gifts from Industrial Cigarrera to its customers and also makes it clear that these are booklets and not simply a horizontal card. They roughly state that inside is a picture of a person. It also provides a mention that there are 25 cards in the set.

To date, I have not seen a complete checklist or representative cards of the entire set.