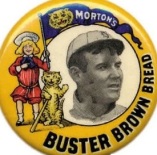 These Buster Brown Bread pins were created to commemorate the 1909 American League Champion Detroit Tigers team. They were created in conjunction with another set from Morton’s that year – the 1910 Pennant Winners set, which also featured the Tigers and had somewhat of a similar design for the company’s Pennant Winner Bread brand.

The Buster Brown Bread pins appear to be more scarce.

The pins include a black and white player image in a circle against a yellow background. The top has a blue Morton’s pennant and the pin also has a cartoon of a young child and a Tiger holding a baseball bat.

One interesting thing about the pins is that names are not printed on them.

Here is a checklist of the known set. It should be noted that Jim Delahanty is known to exist but is either misidentified or does not appear on most checklists.