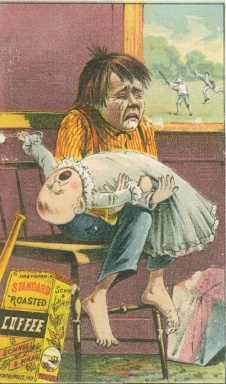 This was a trade card that promoted a coffee brand.

The card serves as an advertisement for Schnull and Krag’s roasted coffee. That is evident by the placement of a package of their product.

The picture features a boy crying while holding a screaming baby. Meanwhile, a recreational baseball game is being played outside. A baseball bat is next to the boy and, putting two and two together, he appears to be upset because he is missing the game.

Schnull and Krag, the company advertising their product here, created several trade cards with at least some using the lithography of Bufford, a popular lithographer that created pictures for other trade cards.