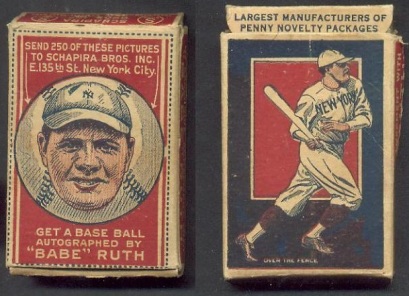 Each card features a color drawing of Babe Ruth. The highlight of the cards was a special promotion centered around them. Anyone acquiring 250 of the cards from the boxes could send them to Schapira Brothers, Inc. (E. 135th Street in New York City) and earn an autographed baseball signed by Babe Ruth.

While acquiring a card is not too difficult, finding uncut boxes, such as the one here, is much more difficult. These cards today are rare and part of that may be from children hoarding them and ultimately redeeming them for the Ruth ball. But as they were also printed on boxes, many were likely discarded.

A total of six different Babe Ruth poses were available on the boxes as outlined in the checklist below. The most common picture is easily the portrait, as that was printed on one side of every box. The other side had a Ruth action pose.

It is worth noting that this item is heavily faked. You’ll see numerous counterfeits of them and that is probably due to the low-quality design and the ability to dupe collectors since it’s a relatively unfamiliar issue to many.

The cards are not dirt cheap, but they are cheaper than most of Ruth’s candy card issues. Priced around the same as Ruth strip cards, these start around $400-$500 in lower grade.

While there are generally six accepted cards in this set, there are actually seven due to a variation on the portrait card. One version of the portrait card has thin arrows pointing downward to the Babe’s image while the other does not.

Based on PSA’s population report for the cards, the version without the arrows seems much rarer.

While five of the six cards in the set feature action poses of Ruth, the image most known is arguably the one on this page featuring a headshot of Ruth.

The basis for that card can be traced back to a 1921 publication produced by the New York Times – a Mid-Week Pictorial supplement. The weekly publication featured images and this one included numerous baseball players inside.

Ruth’s portrait is printed against a baseball on the cover, which is the exact same design used by Schapira Brothers Candy. And with both entities (Schapira Brothers and the New York Times) being located in New York City, some type of collaboration on the set may have even been possible.

The pictorials are rare but you can find them for sale occasionally.