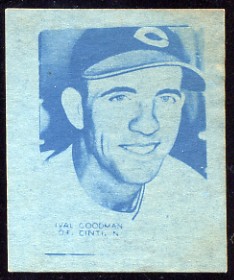 The 1931 W626 Sun Pictures photo kits set featured both baseball players and movie stars. The kits were a unique issue as they allowed collectors to develop their own pictures of famous personalities with a negative. Each package included the negative, a sheet of paper to develop one picture, and a backing mount.

The set was classified as W626 in the American Card Catalog. Jefferson Burdick, the book’s author, classified this as the Sun Pictures set, and described the items as coming in an envelope with various subjects.

Unopened packs of the photo kits have been discovered in recent years. They are difficult to find, but do exist, as documented by this REA auction that had 13 of them. Some have the name of the subject on the outside while others do not. The original envelopes, which came in a variety of colors and measured 4 1/4″ x 2 1/2″, that held the photos stated there were 144 in the set and also provided instructions for developing the pictures.

“DIRECTIONS – Place the glossy side of print paper to dull side of negative. Put both in holder with negative side up. Hold in the sunlight with negative side up for a few minutes. In cloudy weather it takes longer. You can get extra papers at the stores. This paper will also print with your Kodak films.”

While the set contains a total of 144 pictures, only ten were baseball players. Leading the way in this issue is Yankees Hall of Famer Babe Ruth. Ruth’s issue added ‘King of Swat’ directly below his name.

Today, collectors will buy and sell both prints made with the negatives or the negatives themselves. The latter, obviously, is the more valuable of the two.

Here are images of some of the Photo Kits. The checklist below includes only the baseball players.