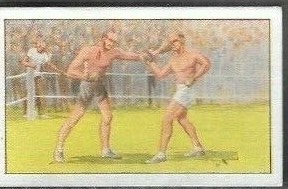 This issue featured a total of 24 cards and was distributed by Thames House out of London in the UK for their Oxo branded beef cubes. Many collectors look at the smaller size and shape of these cards, instantly associating them as cigarette, tobacco, or candy cards. However, they are technically a food card issue. Oxo cubes are still manufactured today.

One notable is that the cards are quite small — even smaller than traditional cigarette cards, measuring just over 2″ tall.

The set is titled “Feats of Endurance” and has moments in time reflecting that. Fronts feature color images with white borders and no text. The back has a description of the picture on the front, as well as the Oxo logo and the Thames House name. The cards appear to have been issued in more than one year. I have seen them listed as 1934 cards but also as cards spanning from 1926-34. It is unclear if they were printed in only two years (1926 and 1934) or printed continuously during that time. Several UK sets, though, were printed in a particular year and then reissued in another year.

Rarely seen in the U.S., these are mostly offered from international sellers. The cards are tough to find but prices for them, like many UK issues, are typically modest.

The cards are a mix of sports and non-sports, though, the sports cards are relatively minor ones. For example, one card depicts a group climbing Mount Everest. Cycling is featured on another card. But the main sports card shown is one that depicts a boxing match. As expected, the boxing card is typically viewed by sports collectors as the key one in the set.

The fight in particular is heralded as the longest fight in recorded history lasting a total of 110 rounds. The fighters depicted on the card feature Andy Bowen and Jack Burke. Burke’s name is misspelled on the back of the card as Bourke. Further, Bowen is referred to as W. Bowen even though his first name is recorded as Andy.

The fight lasted nearly seven hours and 20 minutes until the referee ended it in a no contest decision.

The boxing card is generally the key card in the set, though the card depicting the discovery of America is a key issue, too.

A checklist of the cards is seen here.