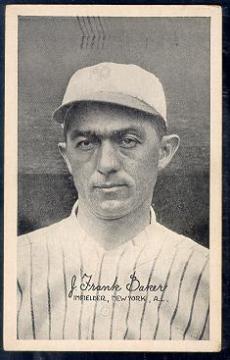 These are sometimes called postcards, although that isn’t really accurate since they were blank-backed. There are other Exhibits that were also postcards but these have blank backs.

The 1922 Exhibit card set features black and white player images. The player names on the cards have a thinner cursive style of font (the 1921 set, by comparison, had a thicker style) and their team name in an regular, unitalicized style of font. In addition to the player’s team, his league and position are also included. The font color for the cards varies — it is black if the image behind it is a lighter shade or it is white for darker backgrounds.

While most of the cards are borderless, some include white borders. Cards do not include card numbers. Almost all of the cards have a vertical layout — the lone exceptions are cards for George Cutshaw, Wally Gerber, James Tierney, and Aaron Ward.

The checklist is noticeably different from the 1921 set. The 1921 set featured many big stars, including Babe Ruth, Walter Johnson, and Ty Cobb. Those players and others, though, are not found here. It is instead believed by some that most of the 1921 cards were also distributed in 1922 along with these new players.

Also of note is that the set includes several cards of umpires.